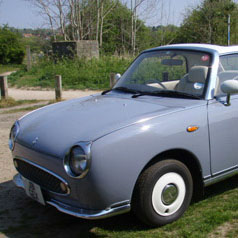 Back in the mid 1980s Shoji Takahashi, a Japanese designer, set about creating a retro-styled car that would have all the charisma of a Sixties classic but with all the benefits of modern standards in safety, comfort and performance. The result Nissan Figaro, first shown at the 1989 Tokyo motor show, the Nissan Figaro was an instant hit and the manufacturer’s original intention to produce just 8,000 units would fall well short and increased to 20,000 units but even this was not enough and potential buyers had to enter a lottery to win the right to make a purchase.

Powered by a 1 litre petrol engine, the Figaro A turbocharger boosts its power to 75bhp and, thanks to a kerb weight of just under 1,800lb, the car offers plenty of zip for the city while still returning good fuel economy with the ability to take to the motorways when required.
With styling more reminiscent of the late 1950s and early 1960s the Figaro was offered in just four body colours – topaz mist, emerald green, pale aqua and lapis grey designed to represent a different season of the year.

The car’s retro-styling extends to virtually every element of the bodywork with desirability further enhanced by its folding soft top. Finished in off-white, with a glass rear screen, the hood folds easily with the release of a pair of screen-mounted catches.
front seats are large and. Trimmed in white leather, The bespoke radio CD, finished in a material akin to Bakelite, takes pride of place in the centre of the dashboard and chrome switches and knobs are scattered around the cabin. power steering , windows are electrically powered and air-conditioning, are standard.

If style, individuality and fun are what you are seeking in a used car then the Nissan Figaro delivers on all fronts – indeed it could just be the one second-hand car you buy that you will never want to sell.

Despite Nissan’s intention to sell the Figaro exclusively in Japan, it was only a matter of time before the first grey imports appeared on British roads.